Set your intention.
What is it you want today?
Check in with your breath.

Connect to your bones
your deep space of compassion
Exhale, Inhale, Breathe.

Choose how you connect
How you speak your words
Draw them from your bone-deep well.

Choose how you connect
how you tether you
with your companion.

Now,
it is time
after these few breaths
Now,
create your connection.

Breathe.
Breathe deep in your bones. 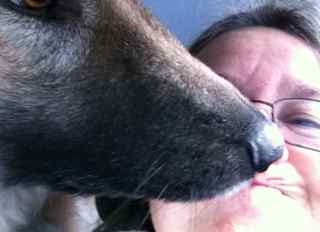 Posted by Jenny Kendall at 7:21 AM No comments: 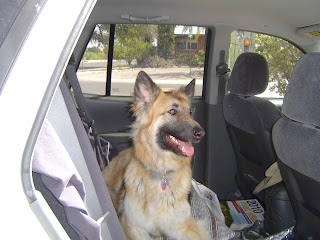 Teaching the DhYoga way means that Ellie sets the course.


It's not about obedience, it's not about commands.
It means that we humans set aside all of our assumptions about our dog. All of them.

We spend some time with other dog/human teams. We practice meditation in movement, we practice coming to that still, quiet place of simple companionship in the company of others.

We practice useful skills for being in public with our canine companions.

If one of our dog companions has something to say, we listen. Instead of commanding our dog to be quiet, we practice skillful listening and skillful response.

Teaching and practicing in the DhYoga Way can be challenging as we set aside long-held habits and beliefs about how dogs are supposed to be. And the practice is so rewarding as explore how our dogs really are.

Posted by Jenny Kendall at 7:22 AM No comments:

Although I do use the clicker as a training tool.

Why am I not a clicker trainer?
Because the clicker is an inanimate object and doesn't need me to train it.

I'm not being obstinate here. Well, maybe I am. Language is important. It is my belief that the language, especially when we are working and playing with other species, needs to be as clear as we can get it.

What I'm trying to do is match my intent to the language that I use. If I'm clear, then there is a better chance that will come across to the animal. And that's one of the main reasons I do use the clicker as a training tool: to establish crystal clear communication.

This congruity of language is also why I don't use the word command when I ask my Ellie for a behavior. I am not interested in an obedient dog. Obedience implies a relationship that isn't very interesting to me. What is much more interesting to me is a happy, socially-skilled canine companion.

Ellie, by the way, does enjoy her practice. That's what we call our training sessions whether it is clicker training or meditation walk or happy-hip vinyasa. "Let's practice!" 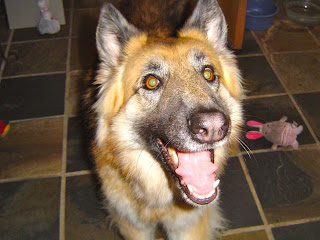 Posted by Jenny Kendall at 7:21 AM No comments:

STOP telling your dog what to do...

At least for a while, at least sometimes, so you can try practicing some yoga with your dog.

Yes, it's been a little while since Ellie and I blogged. We have been taking a break to explore what it means to practice together, and we've shared a little of what we've learned with others, with our first few DhYogaDog classes offered at Dog Central Station in Tucson and with a few WalkAbouts (taking our yoga off the mat, so to speak).

Ellie doesn't much care about the blogging. As for me, I realized that I was interfering with our practice by my own thoughts about what I would blog about. So much for being in the moment. So, I stepped away from the blogging.

So, what have we learned? Actually, it's what I've learned, because our DoGurus already know this stuff: Practicing yoga with your dog means that your dog gets to have the freedom of expressing their own true nature. And part of your practice is to just be in the experience.

The trick is to provide that freedom under the constraints of leash laws and the like and the need for dogs and humans to have good social skills with dogs and humans, and the need for the dog and human to work out the physics of it all. (No, Ellie, you don't get to pull me around because you need to sniff over there - let's work this out.)

And then we've also been indulging in vinyasa yoga play that just happens to have some good physical health outcomes.  Ms. Ellie has been practicing her Happy Hip Vinyasa. We'll get some video of that.

Om shantih
J and E
Posted by Jenny Kendall at 9:39 AM No comments: 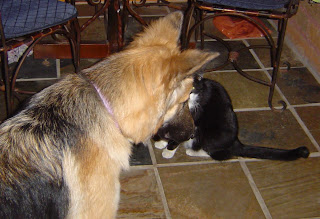 Grrrrrr. It's hard to find a 'biteable' way to describe the dog yoga that we're practicing. A local television station wants to do a story on dog yoga, and the model for that is 'doga', successfully written about in urban newspapers.

Socks (r.i.p buddy) and Ellie demonstrate good 'yoga off the mat' in this picture. They are working on their relationship, changing their habits, taking some time be fully present. But, exciting television it isn't.

We follow (and teach) a yoga therapeutic model, based on the pancamayas, or five dimensions. Most dogs don't need us humans to tell them or show them how to find their stable and comfortable posture (although, admittedly, some sloppy sits might need a little assistance to keep those hips healthy).

After all, who is the teacher and who is the student for adho mukha svanasana, otherwise known as downward facing dog?

The dog yoga we have been working on tends to address more subtle levels than the physical. While I think that television well knows how to play on those emotions, and distract us from our immediate surroundings, dog yoga on the subtle level does not for good television make.

But, you know what? Today's session was really helpful for me anyway. A little bit of kriya yoga: Isvhara pranidhana, releasing attachment to outcome.
Posted by Jenny Kendall at 11:47 AM 2 comments:

Ellie, the dog who flunked her temperament test... 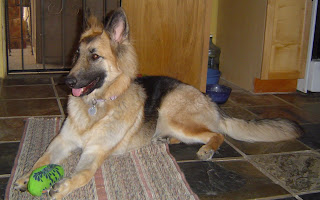 Ellie's the kind of dog that if you say, "Go get him," she looks at you and runs for a toy.

And this was a dog who flunked her shelter temperament test.
Posted by Jenny Kendall at 9:28 AM 2 comments:

How do you know if your dog training is working? 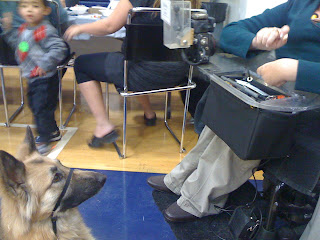 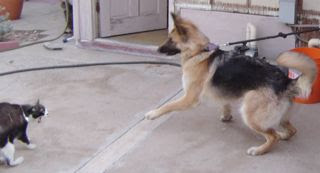 
You know something is working
It's helpful to look back a bit, and see how far we've come.

I give Ellie the lion's share of the credit. I've really just tried to stay out of her way and help her learn the ropes of socializing with people and animals. The rest is pure Ellie. Thanks girl, for coming into our lives.
Posted by Jenny Kendall at 1:53 PM No comments: 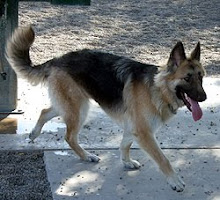